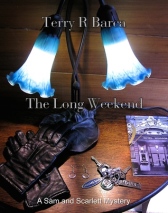 I have read many a book, and I have seen many a metaphor for sex. Doing the dirty. Hiding the sausage. And then there are the ever famous (and my personal favorite) dancing connotations, including the horizontal mambo and/or tango. But this book introduced me to a new one, which just might become my new favorite go-to expression: horizontal folk dancing! I just…I can’t…I don’t even know what to say. I mean, I understand the comparison with the mambo, or the tango. They are sensual and passionate dances which exude sexuality. But folk dancing? Love it.

Sam is a recently retired private detective who has decided to take a long weekend vacation with his wife, Scarlett (aka his folk dancing partner), when a brutal murder takes place near their hotel. The detective on the case knows that the couple is staying nearby, and decides to pop-in and ask a very reluctant Sam for some assistance. Now, I was told before reading this book that it might not exactly be my cup of tea, which to be honest it kind of wasn’t, but when an author is kind of enough to provide me with a copy of their book I feel that the least I can do is read it.

The summary provided on Goodreads talks about how this short novella is more about the characters than exactly “whodunit”, which I thought was a rather strange approach for a mystery novel. I mean, when a murder takes place in a book my first response is to ask who did it. Even though I did enjoy getting to know each character, there were so many flashbacks and anecdotes that it was sort of difficult to keep the timeline of events straight. We learned how Sam and Scarlett first met, why Sam became a detective in the first place, the one and only case Sam ever failed to solve, etc. That’s all well and good, but then there were some tangents thrown in that I couldn’t really see how they related to the unfolding mystery. For example, Sam determines the worth of a bartender based on whether or not he is familiar with an obscure drink from a 1940s movie. I guess we can label that under learning about a quirk of his? Again, there’s nothing wrong with adding in those little details, but they were often discussed in so much detail that it could really drag on and on.

It’s hard to pick just one favorite character in this book, mainly because I really loved Scarlett and Detective Inspector Blank. Scarlett was just so enthusiastic about trying to solve the murder, and couldn’t wait to get to the morgue to look at the body. Can you think of a better way to pass the time on a long weekend? And then there’s the detective who is just so strange I couldn’t help but love him. In the first scene where Detective Blank and Sam discuss the case, Blank is trying to practice different facial expressions to show surprise, hesitancy, consideration, etc. I love me some awkward social interactions.

The entire book was definitely a build up to the big reveal at the end, but I felt it was kind of a lackluster reveal. I thought there was going to be some kind of big Sherlock Holmes reveal by Sam as to who the killer was and why he killed his victim. Instead, when Sam confesses to Scarlett that he knows who committed the crime, he unveils the likelihood of it being a certain kind of person, particularly someone high up in the government who would probably hire someone else to actually commit the murder. I would say that’s more of a profile clue than actually solving anything. It isn’t until the epilogue that we discover who orchestrated the murder, and it was mainly because of Blank’s detective work that the killer was apprehended. Sam just sort of game him some ideas of where to start looking. If anything, this book should be referenced as, “A Sam and Scarlett Mystery…Ultimately Solved by Detective Blank”.

Should you read it? If you’re looking for a short little mystery novel to read over the weekend, then sure. Also, the book takes place in Melbourne, and provides a fun insider’s look at the city, so if you’ve ever been to Melbourne you might get a kick out of the details.

Smut Level: HORIZONTAL FOLK DANCING!! Nothing else need be said.