The male lead in this book is referred to as a dandy. You don’t really hear that as a descriptor these days. “A man unduly devoted to style, neatness, and fashion in dress and appearance.” Um, why don’t we use this word anymore?! Love it!

Lord Fenton is a gambler, a dandy, and a flirt—and he must marry or else he will be disinherited, stripped of his wealth and his position. He chooses Alice Stanbridge for two simple reasons: he once knew her as a young girl, and she is the least objectionable option available to him. However, Alice has harbored feelings for Fenton since their first meeting ten years ago, and she believes his proposal is real. When she discovers it is not, she is embarrassed and hurt. However, a match with the most-eligible bachelor in London would secure not only her future but that of her family as well. Determined to protect herself from making a fool of herself a second time, Alice matches Lord Fenton wit for wit and insult for insult as they move toward a marriage of convenience that is anything but a happy union. Only when faced with family secrets that have shaped Fenton’s life does he let down his guard enough to find room in his heart for Alice. But can Alice risk her heart a second time?

Alice and Charles first met as children after he set a field of grass on fire. She was a rather outspoken lass, and to keep her quiet about his prank, he provides her with a space to develop her very own garden. Flash forward a decade, and he’s an even bigger prankster. However! Something I was disappointed with was that Alice hadn’t grown up to become an even more outspoken adult. Instead she’s the total opposite: prim and proper. When she was younger she wasn’t afraid to speak her mind to the devilish Lord Fenton, but when she is re-acquainted with him at a party in London she gets all light-headed and tongue-tied around him. Come on chica! Don’t make us get out the smelling salts.

Lord Fenton’s antics have become shockingly inappropriate for a gentleman to partake in, and his father threatens to disinherit him. To improve his reputation, he chooses to marry Alice at the urging of his mother. Alice is initially thrilled at the idea of marrying her childhood crush, and the man who helped start her obsession with gardening, but when she finds out it’s a marriage of convenience rather than feelings she gets kind of pissed.

This is where I think there was a missed opportunity for a bit of comedy. The two bicker with each other, but their exchanges are more bitter jabs than witty banter. Fenton, on the other hand was almost too silly. Not so much funny, as just bizarre. His title as a dandy was definitely accurate in that he had a definite interest in fashion, but it was almost taken to a point of obsession that was a little out there/disturbing. It’s almost like his addiction to fashion was taken too far, but their banter wasn’t taken far enough. 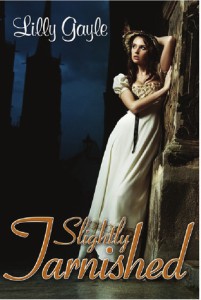 Although the tale is a romance between Alice and Charles, his family also plays a large and important role in the book, specifically his mother. His mom has been keeping 2 big secrets from Charles for years, and although I won’t spoil them here I’ll tell you that one was fairly obvious, and the other was meant to be a much bigger reveal. However, I was actually expecting this bigger secret because I’ve seen it before in another historical romance: Slightly Tarnished by Lilly Gayle.

Unfortunately, I must say that I liked how the reveal of this big secret was handled in Slightly Tarnished much more than in this book. The other novel really used this secret revelation as a way to show the strength and commendable behavior of the female lead, whereas in this book Alice didn’t really step up to the plate, and showed her weakness if anything else. If you want to know what the heck I’m talking about, I guess you’ll just have to read the book!

*An ARC of this book was provided at BookExpo America*

Series: I don’t think so.

Should you read it? I don’t think this book really reached its full potential. I understand that Alice and Charles were meant to be portrayed as enemies before falling in love, but I think this transition to mutual respect for one another happened too late in the novel.

Smut Level: This is a very clean read. It ends with a kiss, albeit the suggestion of more pleasurable things to come.