We’ve got a leather-wearing biker bad boy who used to be in the military. Can you really get more alpha than that?

Wes Silver wasn’t looking for love, but when July Mayson literally knocks him on his ass during their first encounter, his world is turned upside down by the quirky blonde, and every moment with her makes him more determined to protect her. July Mayson doesn’t understand the pull she feels toward the bad boy biker Wes Silver, but she knows being with him is like nothing she’s ever felt before. Now all she has to do is tell her overprotective father, Asher Mayson, that she’s found her boom.

July first meets Wes whilst riding on her motorbike. She then proceeds to call him a jack ass before using her taser on him. Ah, isn’t that how all the great love stories begin?

This series is a spinoff of the Until series by the same author, but instead follows the children of the characters from the first books. I was so unbelievably excited for this book to come out, and it wasn’t half bad. I will say there are a LOT of characters in this book, considering that the original Mayson clan procreated like crazy. This made it a little confusing to designate who was who, and I really think that a family tree in these kinds of series would be extremely helpful. That being said, it was a lot of fun to see the characters from the original series again, not to mention that you can see how the story lines are being built between all of the characters for future books.

The Until series was packed full of alpha males, and it looks like that theme is continuing into this series as well. However, Wes was almost too controlling at times. Basically, whenever July would try to speak her mind about how their relationship was moving too fast he would call her a pain in the ass. Listen here duck monkey, being an alpha is fine in the bedroom and all, but don’t be a controlling dick when you’re outside of it. Speaking of the bedroom, Wes may not have written the book on dirty-talk, but he was definitely a co-author. He’s got a naughty mouth, and my goodness does she like it. 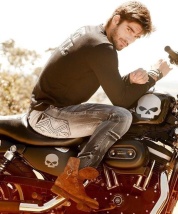 There was some intrigue in this novel surrounding a biker bar, and Wes tries his damnedest to keep July in the dark about it. However, in doing so we too are left in the dark, so I felt like that story line wasn’t really explained completely. All we really know is that there are some bad people doing bad things, and Wes and his biker bros are helping out. Maybe a chapter where we follow his character into this hellish biker bar to find out what’s what would have been helpful. There were also a few grammar issues. I get it people! The difference between your and you’re is confusing. And then when you throw there and their into the mix, well it’s just like somebody created words with 2 different meanings!

As for my last point, I’m kind of embarrassed that I know this, but it just demonstrates that a little fact checking can go a long way. Towards the end of the book, July and her friend pretend they are going to the premier of Fifty Shades of Grey, when in reality they want to do some sleuthing to follow Wes and his bros. Considering that all men are under the impression that their penis will shrivel up and die should they see that movie, he lets them go, and they are able to sneak away from the theater because their designated bodyguard refused to see the movie with them. However! I sadly recall that Fifty Shades of Grey premiered on Valentine’s Day, and I am 100% positive there is no way in hell that Wes would’ve allowed July to spend that day separated from him, so I know they didn’t actually go to see this during the premier in February! Again, it’s not like the plot fell apart because of this error, but fact checking is important.

Series: Until Her, book 1

Should you read it? You really need to love your alpha males if you’re gonna read this one. I’ll admit that I love a good alpha, but even I wanted to slap Wes at times for being too damn controlling.

Smut Level: They do all manner of dirty things, including a spanking session in her veterinary office. It kind of makes ya think what really happens behind closed doors at those places.

5 thoughts on “Until July by Aurora Rose Reynolds”