I say alpha you say male. Alpha…Male! Alpha…Male! When you consider how much testosterone and possessiveness is running through this team of former Marines, you can’t help but wonder if they just sit around exchanging masculine grunts instead of having an actual conversation. 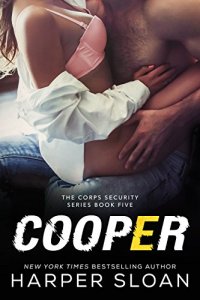 Do you take me seriously? Because I don’t. I use my jokes and easygoing personality to hide the pain I’ve felt since he took his last breath. I’m adrift without my partner in crime, my best friend…my brother. I can taste the vengeance just within my grasp. Until she barges into my life. Promising me happiness and a peace I’ve been craving for years. She is the sun to my darkness, the happy to my despair. But she holds secrets. Just like I do. She holds hers close, where I just pray mine don’t rock the walls we’re trying to build. Now I’m stuck at a crossroads between my desire for revenge and my craving for her and the life we could have together—and I have no idea which road I should travel. All I know with crystal clear certainty is that the past has the power to destroy it all.

A brother. A teammate. A friend. We’ve come to know this group of Corps Security alpha men very well. Their camaraderie is palpable, and for the last few books we feel like we’ve also become a part of their team. To lose a member of that team at the end of the last book, perhaps the most fun loving and carefree of the bunch, shocked us just as much as it shocked the characters. Surely we can’t lose one of the core? It seems impossible, especially seeing as he put his life in the path of a bullet to save another. A selfless end for a selfless man. This book opens in the aftermath as the team picks up the pieces following Coop’s death. Asher is still reeling from the loss of his brother and best friend. Chelcie is going through her own torment over the fact that after her one-night stand with Coop she never got the chance to tell him she was pregnant with his child. Now she needs to figure out how to tell Asher that she’s going to have his late brother’s baby. The intense sexual tension between Chelcie and Asher definitely isn’t going to make this inevitable conversation any easier or less awkward.

Looking to the Past

Throughout the novel we see a sprinkling of flashbacks which feature Asher growing up with his brother from the time they were young boys to adulthood. In a way, this book is just as much about Asher and Coop as it is about Asher and Chelcie. We see their humble beginnings in an abusive and neglectful home environment, and see how they grew up into two very strong and protective men. It’s revealed to us how Coop never intended to have a family, primarily because of the negative impact his mother had on his outlook towards women. However, it also becomes clear that Coop would have shown his baby with Chelcie nothing but love. He would have vowed to be there as a caring parent in a way neither of the Cooper boys ever had growing up. These flashback scenes were probably the most emotional and revealing moments of the entire novel. In a funny way though I sort of cringed every time a chapter would start with a flashback moment between these two brothers, because I just knew it was gonna be tugging at my heart strings. They simultaneously became both my favorite scenes, yet also the ones I dreaded the most.

The Light Amidst the Darkness

Asher spent his whole life up until this point protecting his younger brother, and yet in the end he couldn’t protect him in his hour of need. His dark spiral following Coop’s death is clearly understandable, and Chelcie becomes the light that pulled him out of the darkness following the death of his other half. I do wish we could have seen more direct scenes of Chelcie and Asher connecting during this emotional time. We hear about it in snippets after the fact, and more about how she stood by him to try and locate Coop’s killer. However, all we really see at the start of this book is how Asher buried himself in endless bottles of booze and warm bodies to try and smother his grief. We only see scenes highlighting how he lashes out and insults Chelcie in his drunken stupors. It’s actually one of his teammates who succeeds in snapping him out of this dark spiral to try and find something worth living for. That’s when we see Asher latch onto the image of Chelcie as his guiding light. It doesn’t seem like she so much had an immediate hand in influencing him, but rather her mere presence in his life helped him maintain his sobriety. 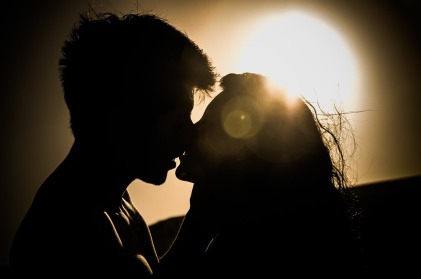 It’s a rather odd family situation we have going on here when you think about it. Nothing quite like feeling possessive and desirous of the woman your late brother knocked up. However, this sexual chemistry between Asher and Chelcie has been boiling for a while, and he was especially determined to make her his even before he found out she was pregnant. Once the truth does come out, the question becomes how will Asher be a part of Chelcie and the baby’s lives? Uncle and boyfriend? Uncle and husband? Uncle and daddy? No matter what way you look at it, he’s going to be involved. After all, Chelcie is his sunshine, and they are each other’s person. That being said, I can’t help but wonder what the situation would have been like if Coop hadn’t died at the end of the previous book. Would Asher and Chelcie still have ended up together, with an odd co-parenting situation going on with Coop on the side? It’s hard to imagine a situation where our uber alpha Asher would have stepped back on the sidelines to observe his brother and the love of his life raising a baby together. Just an interesting thing to consider. 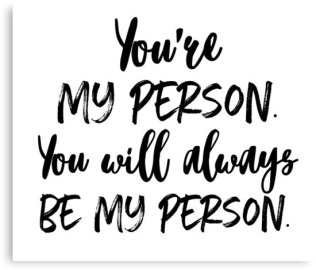 Series: Corps Security, book 4. I think of all the books in this series so far, I’m looking forward to the next book the most.

Final Impressions: This was a short read, and one that definitely packed an emotional punch. The loss of one of the Corps Security team is a hard pill to swallow, and you just hope that Coop will walk around the corner back into their lives at any moment, but sadly that’s not the case. You also can’t deny that the familial situation we see presented here is rather bizarre. Asher is as alpha male as they come, and he’s always felt a possessive connection over Chelcie. The fact that she’s pregnant with his deceased brother’s baby doesn’t deter him in the least. He’s initially peeved over the fact she kept it from him for so long, but after an initial hissy fit he’s as devoted as can be. The novel definitely ends with an interesting twist I wasn’t expecting in terms of suspense, so there’s that surprise element to look forward to as well. 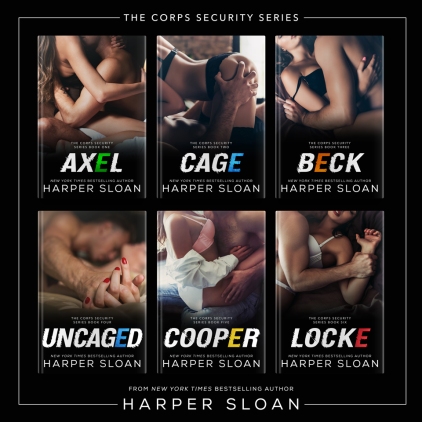