I’m back from my glorious adventures at BookExpo America! Gather round, I’ve got stories.

This was my first venture to BEA, so I really didn’t know what to expect. The most common piece of advice I heard for first timers was to wear comfortable shoes. I’ll admit, after three consecutive days of visiting booths and standing in line for autographs, my toes are a little sore. However, my shoulders ache something fierce! I figured I’d get a couple of free tote bags while I was there, but I never imagined I’d acquire about 10 lbs of free books every day. I actually had to buy another suitcase so that I could bring my clothes back home with me. Altogether, I hauled backed 36 books, 28 of which were signed. Now, did I lug back too many books? Ha! There’s no such thing as too many books.

Although each day was an adventure, what with the Bloggers Conference on day 1, and my first booth visits happening on day 2, the highlights of the trip definitely took place on the third and final day. While everyone was lining up bright and early Friday morning to see James Patterson, I was anxiously waiting for the doors to open so I could visit the Romance Writers of America booth for an author autograph signing. Seeing how many people were in front of me to enter the exhibit area filled me with dread (the line stretched around 1/2 of the convention center), as I was worried they’d run out of books by the time I arrived at the booth. But alas, the doors opened promptly at 9:00am, I made a mad dash for my designated booth, and was 5th in line to get my collection of romantic short stories, Premiere, signed by Sylvia Day (Crossfire series), Laura Kaye (Hearts in Darkness), and Monica Murphy (One Week Girlfriend series). That’s right people! I got one book signed by 3 amazing romance authors in one go. To say I got a little emotional will make me sound like a super freak, but ah hell, I got a little emotional! 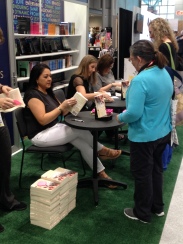 So that was the first highlight of the day. The second came a bit later in the autographing area, where Laura Kaye was signing one of the novels from her Hard Ink series, Hard to Come By. I’m happy to say that I was actually first in line for the signing. When I saw that one of my favorite romance authors was going to be at BEA, and that I might actually have the opportunity to meet her, I couldn’t believe it. Not only do I think her book, Hearts in Darkness, is hands down the best romance novel to ever feature two people trapped in an elevator, but it was actually one of the first books to really inspire me to start blogging. That might sound strange to some of you, but after reading something I enjoyed so much, and having nobody I knew to share it with, blogging was an outlet for me. Getting not just one, but two novels signed by the impeccable Laura Kaye was an amazing experience, and one I’m not likely to forget. Especially since I have a photo of it! 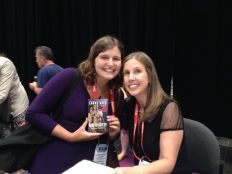 The Rest of BEA

Overall, I had a lot of fun! Everybody I met was so unbelievably nice, even the authors. I learned some good tips at the Bloggers Conference, especially when it comes to interacting with authors and publishers. Not feeling obligated to provide a review in exchange for a free book was a great piece of advice. The Harlequin booth had some awesome signings, as well as some delightful pics of ruggedly handsome hotties around their boothing area. The Ellora’s Cave booth was hilarious with their calendar models out front to lure in the ladies, and their tagline of, “Helping make Babies since 2000.” After all, romance novels are an aphrodisiac. Love it! Sure, I sort of felt like cattle being herded around in the autographing area, and my shoulders are still sore from carrying around so many books, but it was totally worth it! 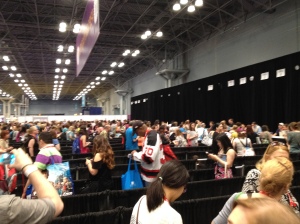 Next Year BEA is Headed to Chicago!