A review of their past will make these two contemplate if a future together is possible.

Love behind the wickets.

English vice-Captain Claude de Lussan is the poster boy for English cricket. He’s smart, handsome, rich and a damn fine cricketer. And Delilah Taylor loves him to bits. Her whole existence revolves around him so much so, she polishes his autographed ball from his first century every weekend as it sits in her cabinet. Except, Claude de Lussan doesn’t love her back.

Following a heady summer, she finds herself suddenly married and divorced from the cricketer only to find him return to her world years later. Can they resolve old hurts and bury the past to rebuild a future together? Can they overcome family resentment, old flames and misunderstandings to accept that they what they had was and still is special?

Alright, confession time. I have never in my life watched a cricket match. Game? Competition? After reading this book I understand wickets are involved…whatever they are…Now, I know what you’re probably thinking, typical American! Well, if it helps at all, it’s not like I’m only into football or baseball, I just don’t care for sports in general. Probably because watching people enduring so much physical activity reminds me how I should probably work out more 🙂 All that being said, do you need to understand all the rules of cricket to understand or follow along with the plot of this novel? No, not really. Every chapter is entitled after a cricket phrase, and our two lead characters do bond over Claude’s expertise in the game. However, I do think it would have added an extra layer of appreciation to understand how the cricket chapter titles maybe corresponded to the content of that chapter, but alas I just had to go with the flow. I will say though I am very intrigued now to watch a cricket match after completing this read!

If I had to describe our lead characters in one word it would be the following: flawed. In a way, it made them more relatable and “human” to see they were subject to making some of the same mistakes, and even jumping to rash conclusions, like we are all capable of doing. The flip side of this though was that it was also kind of difficult to fall in love with our leads for a decent portion of the novel. It wasn’t even until the final scene of the book where I was somewhat convinced that it would be a good idea for Claude and Delilah to make another attempt at a relationship together. Pretty much from day one, Claude was always head over heels in love with Delilah’s friend, Grace, in a way that reminded me of Romeo’s infatuation with Rosaline in Romeo and Juliet. Essentially, you know he’s smitten, but you have absolutely no idea of what he sees in her beyond good looks. Even though he completely adored Grace, her blasé attitude toward him slowly made him turn to Delilah as a second choice.

Claude constantly straddled a line between the two women throughout the whole book. It seemed as though he didn’t really care for Delilah at all as a person until he eventually loses her. He keeps going back to Grace even as she was dating his brother, and when she ultimately reveals herself to be the ultimate duplicitous villainess, Claude is still willing to consider a future with her. At one point in the story Claude and Delilah were really starting to build a strong foundation together, and yet he was more willing to believe Grace’s word over Delilah’s, even though Grace has never really give him any reason to trust her. There was one scene in particular where we witness Grace’s ability to get inside Claude’s head, and it results in him spouting the most heinous vitriol towards Delilah that he no longer seemed relatable as a character, just downright mean. It was during moments like this that I couldn’t help but wonder if Delilah would have been better off without him. We eventually see Claude turn a corner, and realize that he lost something truly special by letting Delilah get away. However, this turnabout sort of came too little, too late in the game for my opinion of him to flip entirely.

Series: To Love a Sportsman, book 2. I hadn’t read book one in this series, but had no trouble diving right into this second novel.

Final Impressions: Aside from disliking one half of our lead couple through some critical scenes, another aspect of this read that I had a bit of trouble adapting to was the flashback format. While it was interesting to see scenes of Delilah and Claude divorced in the present juxtaposed against flashbacks to how they met, married and what led to their split, it was also tricky to follow along at times. As the novel progressed, and the timelines got closer together involving their somewhat constant arguing as Claude continued to waffle between Grace and Delilah, it became harder to distinguish between when we were in the past versus the present.

Smut Level: Nothing too descriptive, though there are a few moments of passion. However, seeing as these passionate scenes occurred between Delilah and Claude when he was still technically involved with Grace, it was kind of hard to become fully invested in these sensual moments.

This novel presents us with the best concept ever in Romancelandia: flirtationship. “When two people flirt non-stop and know nothing will ever come of it.” 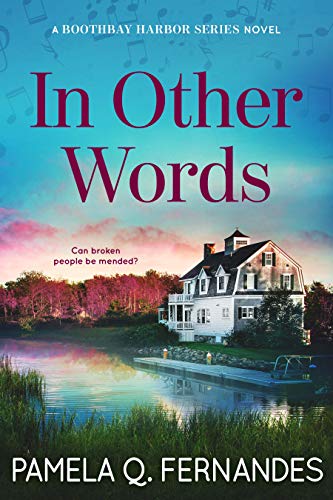 Trish Holt is a pianist, living in picturesque Boothbay Harbor, Maine. She is stunned and blindsided by the most bitter kind of betrayal: her boyfriend of three years has left her. His new lover is her manager. Her bitterness is compounded by the fact that Trish has made bad choices when it comes to past relationships. Much of it stemming from her own issues as an adopted child from Korea. She holds herself partly responsible for the breakdown in their relationship as she tries to fit into the stereotype of the ‘All American’ girlfriend.When she moves out to a new home, she encounters Michael Quentin. Not only is he her neighbor but also a local chef on the island, who romances her and helps her get over the betrayal. As Michael and Trish fall in love, their childhood issues resurface.

Can Trish stop herself from loving Michael whose own family’s dark past is holding him back?

Can she ignore his love for tradition and roots?

From a distance, Michael and Trish couldn’t appear to be more different. He’s a relentless playboy chef who can never commit to a serious relationship. She’s a pianist who desperately clings to her boyfriends in fear of being abandoned. And yet, as we continue to peel away the layers of these two characters we discover that they actually have more in common than how it might appear on the surface. Their respective familial relationships have severely impacted their adult relationships with others, and we question if Trish and Michael will ever be able to overcome their past pains in order to find a loving future with each other.

Finding Similarities in the Differences

Trish was adopted as a child, and when her adoptive parents have another child of their own they fawn over him in a way that leaves her feeling both unloved and unwelcome. She grew up feeling as though she never truly belonged to this family unit. In her later relationships with men, we find her previously troubled family interactions make her desperate to latch onto the man in her life for fear that he’ll eventually push her away. This creates a vicious circle in that these men become so exhausted at her clingy nature that they still want to push her away. When the inevitable eventually happens, Trish tries to find an escape in music. By losing herself in the keys of her piano, she is able to create something beautiful that she has complete control over.

For Michael, his love life has also been severely impacted by his relationship with his parents, but it presents itself in a very different way when compared to Trish. Michael’s parents met a tragic fate when he was younger. His father killed himself, and his mother soon followed after drowning herself in alcohol. Rather than latching onto people like Trish does, Michael has the tendency to push them away. In his mind, everyone will leave him sooner or later, so he’d rather be the one doing the leaving so it’s on his own terms. When he once again finds himself alone in the world, Michael also looks for an escape that he can throw himself into completely. For Trish it was through music. For Michael it’s through creating food in his kitchen.

When Michael and Trish eventually cross paths, you’d think it would be like water mixing with oil, and in some ways it definitely was. These two entered into a rather exhausting tug-of-war in that they were constantly pushing each other away in spite of the draw steadily pulling them together. When all was said and done I think I enjoyed the psychological aspect of their relationship more than the romance itself. There were several moments where I couldn’t help but question if Michael and Trish were actually right for each other, and some of their actions/decisions towards each other and their families were difficult to understand. For example, Trish was willing to attend the wedding of her cheating ex-boyfriend, but not her brother’s. When she and Michael eventually did start a sexual relationship she was willing to continue sleeping with him even though she wanted more than a casual fling, but realized he didn’t want the same. However, she figured the more sex they had, the higher chance that it might result in her getting pregnant with a baby she could have all her own. Mkay then…maybe not the best decision ever.

As we’ve seen, the relationship between Trish and her parents had a heavy influence on her latter relationships in life. Towards the end of the book we see how discussions with her mother and father directly correlate to her outlook regarding her relationship with Michael. Apparently when her mother and father first got together decades ago, her mother was getting over losing the ultimate love of her life. When Trish shares the details of her fling with Michael, her father cautions her to end it as soon as possible. He declares that when Trish does eventually settle down with a partner in the future, this man will be heartbroken to realize he’s always played second fiddle to her constant yearning for a man she could never have. However, when Trish discusses Michael with her mother, she gets the complete opposite advice. Her mother tells her to grasp those perfect moments with Michael as long as she can, no matter how brief they might be, as they’ll be beautiful memories to sustain her later on in life. Again, some of the psychological components of this read were rather interesting to consider.

Series: Boothbay Harbor, book 1. I definitely found Michael’s siblings to be an intriguing bunch of people!

Final Impressions: While there were definitely some interesting observations regarding love and life with this read, I can’t say I fully fell in love with Michael and Trish as a couple. They almost spend too much of the book pushing each other away, that I wasn’t 100% convinced at their eventual coming together. I also wish we could have seen them lean on each other more to remedy some of the tensions surrounding their familial relationships.

Smut Level: It might take a while for these two to get there, but they certainly go at it with full force when the time comes.