Alas, the series had to come to an end at some point. We all hold our breath in collective anticipation, wondering if this group of friends will finally succeed in breaking the time loop cycle they’re stuck in to save the world.

The thrilling conclusion to the trilogy…Eli Hernandez spent decades cultivating an image of fear and domination as the nefarious leader of the New Establishment. Yet, deep inside, he still clutches onto the barest hope that his irredeemable soul has vestiges of virtue. Alora Castillo lost everything one fateful day long ago as Eli looked on, unable to stop the carnage. Resolved to detest him, she must forge ahead when they are thrust together as unlikely allies. As the ragtag team of time travelers strives to reconnect with their leader, dark forces hide behind the scenes, manipulating fate as the cycle carries on. Determined to succeed and prevent the past, the team battles the evil regime, unwilling to accept failure. But accepting the yearnings of the heart requires forgiveness—a concept Alora dismissed long ago, no matter how fervently she secretly longs for Eli’s embrace. Will the team save the world and prevent President Randolph from detonating the apocalypse? Read the electrifying finale now!

Each and every couple in this series was just as delightful and entertaining as the last, and these two just might be my favorite of the group. There was so much angst, passion and heated history between them that you couldn’t help but root for them to acknowledge how much love and adoration was lying just beneath the surface. In any given scene you couldn’t really tell if they would fight, scream, shove the other up against the wall to tear their clothes off, or a combination of all of the above. There’s a complicated past which exists between Eli and Alora which was constantly pulling them together, yet pushing them apart at the same time.

The history of Eli and Alora is fraught with tension, pain and distrust. Years ago, Eli’s father killed Alora’s entire family, and while he couldn’t find a way to save them all, Eli was able to convince his father to spare Alora’s life. Throughout the years they’ve been enemies, constantly fighting against each other. However, only recently have they discovered they’re actually allies, as Eli has secretly been finding ways to support their rebel cause and mission to bring down the New Establishment which is set on world domination. When Alora is captured by these enemy forces, Eli once again has to use his cunning to think of a way to rescue her. What better solution than to suggest a marriage of convenience? Loooove it!

While Eli is constantly demonstrating his will to protect Alora, there is still an underlying distrust she feels towards this man. After all, she’ll constantly associate him with that terrible day when her family was gunned down in front of her. They always say “actions speak louder than words”, and Eli’s actions certainly express an unbreakable devotion to Alora, but she still finds it difficult to accept his help towards her and her friends. When he eventually declares his love for Alora she sees it as the ultimate challenge to forgive and forget a past which has influenced her entire trajectory in life. It’s easy for us to berate Alora’s decision to constantly push Eli away, especially when we consider how many times he’s risked his own life to protect her. I lost count of the moments when I wanted to exclaim, “oh just forgive him already!” However, it’s also crucial for us to remember that tragic moment from their shared past which makes us understand why it is so difficult for her to pull Eli into her arms.

Series: Prevent the Past, book 3. Something I loved about this entire series was that in addition to being presented with an engaging couple, we’re always exposed to a strong and admirable female lead. This final book in the series was no exception to that delightful feature!

Final Impressions: Eli and Alora were certainly a captivating couple of characters, but just as entertaining was the family we’ve followed throughout this entire series. They’re not necessarily a family bound by blood, though some are unknowingly connected in that way. Rather, they’re a family of their own choosing. They’ve fallen in step with each other, and are honored to fight and die by each other. It was such a beautiful and honest form of familial devotion. We are constantly kept guessing as to how this team will succeed in saving the world, and if it’s even possible to break out of the time cycle loop in which they constantly fail in their ultimate goal. It’s a fun guessing game right up to the very end. The final aspect of this novel which I enjoyed was the fact that while Eli was the first to say he loved Alora, and constantly tried to fight for her affection, in the end we see that she must now fight for him. The fate of their relationship didn’t just lie in one or the other, but instead they each had to step up to the plate.

Smut Level: Eli and Alora have a chemistry which is off-the-charts explosive. 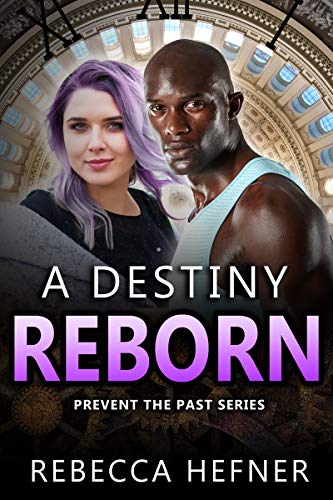 This series follows a team of time travelers who travel to 2035 to prevent a nuclear apocalypse. Considering how this year is going…maybe they should have set 2020 as their destination!

Thrust into a world they barely comprehend, two time travelers are forced to survive with only each other as allies.Claire Finch, the kind, bubbly scientist, has sacrificed her hidden dreams for the cause: to prevent the apocalypse and save the world.Cyrus Montgomery, a tough, stoic soldier weary from the battle scars of war and barren dystopia.Together, they traverse the unfamiliar circumstances, both fighting and denying their mutual attraction.But destiny can be manipulated by unseen forces, and as they navigate the uncharted timeline, they discover a united strength they never possessed apart…and learn that true love ultimately prevails if the warnings of the past are heeded with caution and diligence.

The first novel in this series focused on a team of scientists and other heroes who were determined to finish building a time travel device, and go back to 2035 to prevent the moment in history when everything went wrong. At the end of that first novel we saw some team members successfully travel back in time, but ultimately discover they were stuck in an endless loop of traveling back only to continuously fail in their pursuit, so that everything could start back up again from the beginning. This second novel opens with two members of the team who overshot the 2035 destination, and instead find themselves in 2002 separated from the rest of their team.

I’ll admit, I was a bit wary to discover this installment finds our lead characters separated from the rest of the team, as the family dynamic between all of the characters was one of the standout features of the first novel. Would Claire and Cyrus be able to provide enough of that chemistry to replace the connection we saw from the group? While I did miss some of that friendship we glimpsed throughout the team, believe me when I say that Claire and Cyrus have enough playful banter between them to keep you entertained, not to mention their solitude pushes the plot forward in other meaningful ways.

My initial apprehension over the missing crew members quickly turned to pleasant surprise at the discovery that their absence would allow Claire to come into the spotlight and shine all her own. It seems as though even Claire was surprised to find that she’s a bad-ass in her own right. While she definitely appreciates having Cyrus there with her in this strange time to help guard over her, Claire never fully falls back on him to protect or rescue her from trouble. Living in this other timeline away from the group makes her realize an inner strength she never knew she had. She also has the chance to reflect on what she really wants out of life.

Even though they were shocked to find themselves essentially stuck in a time so distant and different than their own, Claire now acknowledges that she wants to stay in this timeline. She and Cyrus can help research and set the groundwork needed to help their team in the future, but there will no longer be this sole driving motivation of needing to save the world resting on their shoulders. They finally have the chance to live a life of their own choosing, not to mention be surrounded by enough bountiful food to have french toast for breakfast, lunch, or dinner whenever they feel like it.

Standing Right in Front of Her

Rather than being solely focused on time travel and saving the world, living in this other timeline also allows Claire to admit what she wants in life more than anything else. Cyrus. She’s loved him for years, and has always sensed an underlying attraction from him as well. Only when they now have the opportunity to spend time alone with each other does Claire discover just how much Cyrus has been pushing his feelings for her to the side. He continuously tries to push her away, declaring that she deserves someone better who is also closer to her in age.

Claire doesn’t know when or why Cyrus convinced himself that he wasn’t good enough for her, or that she wasn’t strong enough to go after what she wants. And she wants him. A life together with him. Claire refuses to let Cyrus push her aside, and it was unbelievably refreshing to see this woman find the strength within herself to no longer be relegated to a corner. She’s not afraid to fight for him, or show him all the reasons they belong together.

Series: Prevent the Past, book 2. I can’t wait to see where this series goes, especially in regards to whether or not our team can break the loop they’re all stuck in to succeed in saving the world.

Final Impressions: This second novel definitely starts and ends with a bang, but throughout much of the book we see Cyrus and Claire play more of an observatory role in relation to the dramatic events leading to the apocalypse. I’ve always considered romance novels as an escape from the harsh realities of the world, and while the connection between our two lead characters provided that pivotal escape at times, this series also demonstrates how far political aspirations and beliefs can plunge the world into absolute chaos. All things considered, it was a tad depressing at times to witness the realism lying within this futuristic plot. Nevertheless, you’ll fall in love with Cyrus and Claire, and hope that somehow this team will succeed in finding a way to prevent the past.

Smut Level: Cyrus’s broken ankle might have him limping around town on crutches, but it certainly doesn’t slow him down in the bedroom! We see a few dominant tendencies emerge from Cyrus, but nothing that goes too over the top. Their chemistry is simply delicious.