Just because you’re a shy and mousey assistant doesn’t mean you can’t have numerous sexual fantasies about your boss, featuring copious amounts of massage oil and rubbing. Remember that.

Trying to outwit the spell only makes matters worse. Shy and quiet Amanda Santorelli is unhappy watching the world go by around her. When her well-meaning but wacky aunt casts an assertive spell on her, Amanda’s orderly world is turned upside-down. Unable to control herself, Amanda blurts out whatever is on her mind every time someone asks her a question. With no control over her own mouth, it’s only a matter of time before her boss discovers her secret. Mark Abbott is happy with the way his unassuming assistant runs his office. But all of a sudden she’s become a new person—both in attitude and appearance—and he’s not sure he likes the effect on his orderly work routine. With each passing day, he finds himself waiting to see what will come out of her mouth next. Before long, he can no longer deny the truth—the new Amanda is seriously making him reconsider his vow never to mix business with pleasure. Mark doesn’t know if it’s love—or if he’s just a victim of Hocus Pocus.

Yes, it’s a cheesy premise, but just sit back and have some fun with it! If anything, I think it wasn’t taken quite far enough in its execution. When I read the synopsis describing how this spell forces Amanda to speak the honest truth to any question asked of her, I was expecting her boss to catch on and use the spell to his advantage. You know, “What do you want me to do to you?” “Does this feel good?” et cetera. Although Mark does find out about the influence of the spell, as well as Amanda’s true feelings for him, it made them pull away from each other rather than start pulling each other’s clothes off.

Whereas I was hoping the discovery of the spell would bring Amanda and Mark closer together, it does the opposite. Amanda is so intent on keeping her deepest sexual fantasies a secret, and Mark doesn’t want to admit that he’s suddenly intrigued by his assistant’s outlandish behaviour, that they don’t spend as much time together as I would’ve liked. This results in a lack of a deep connection between the two once they did finally listen to the cries of their burning loins.

Mark is adamant that he doesn’t want to mix business with pleasure (ha, good luck with that one buddy), and he really doesn’t want to get involved in a committed relationship. Amanda, on the other hand, wants it all. Not an uncommon theme for a romance novel, by any means, but these two unsuspecting lovebirds rehash the same argument over and over and over again! After a while they’d both expressed their hesitancies in every way possible, so they just started repeating their previous arguments word for word. Come on people, move on and jump in bed together already. Under the Amazon description online it says Warning: Alpha Male, but I can’t really agree with that assessment. If Mark really was an alpha male, he wouldn’t have pulled away from Amanda as many times as he did.

Getting to the Good Stuff

After the halfway point I seriously started to question whether or not these two would ever act on their feelings for one another, or if the book would simply end with a chaste kiss. FYI: I hate when books end like that. Thankfully, we finally get to the good stuff around 80%, and oh my Grey Goose martini was it surprisingly delectable. Here I was wondering if we’d get to see anything steamy, and we are privy to a scene involving chocolate body paint! You’ve really got to question though if that stuff tastes anything like chocolate. I wonder if Godiva makes any? 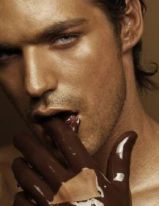 Series: It’s heavily implied that there will be a sequel involving Amanda’s sister Sarah, but I haven’t seen anything definite.

Should you read it? You have to be prepared for a rather silly story line, and one that doesn’t quite reach its full potential. That being said, Amanda’s Aunt Lily elicits a few giggles with her crazy antics and, you know, spell casting.

Smut Level: We are only offered glimpses of some slightly steamy sexual fantasies for the majority of the book, but it pays off in the end.