A sassy alpha female wolf with lots of spunk? Check. A dirty talking alpha male with possessive tendencies? Check. A final wolf battle between bitter enemies? Check. You’ve got all the makings of a great paranormal romance read with this one!

When female wolf shifter Taryn Warner first encounters Trey Coleman, an alpha male wolf shifter with a dangerous reputation, she’s determined to resist his charms. After all, Trey—who was only fourteen when he defeated his own father in a duel, winning the right to be alpha of his pack—can’t have anything to offer the talented healer besides trouble, or so she thinks. Taryn finds herself drawn in by Trey’s forceful demeanor and arctic-blue eyes, and she eventually agrees to enter an uneasy alliance with him. If the two succeed in convincing their respective packs that they’ve chosen each other as mates, Trey will win valuable political allies, while Taryn will escape an odious arranged mating.

But there are a lot of potential pitfalls to this plan—including the very real possibility that the wolf shifters, overwhelmed by their growing attraction to each other, will be unable to maintain the clear heads needed to pull off the deception.

I’m not a huge fan of paranormal romances, especially those involving wolves, but I gotta say even I enjoyed this one. It carries the unique aspect in the fact that Taryn is latent, meaning she is unable to shift into her wolf form. This results in her pack, and even her own father, treating her like crap. When her dad tries to marry her off to a sadistic creep for the benefit of a powerful alliance, Taryn’s decided she’s had enough, and that she must abandon her pack. Enter the sexy alpha, Trey, with an offer to mate to fix both their problems for the time being. Although their mating initially seems convenient, it’s quite difficult for them to accept internally, as both of their true mates died when they were younger.

Taryn especially doesn’t want to offend the memory of her deceased mate and childhood friend by entering into a false mating with a wolf known to go feral. However, as they spend more time together, especially in the bedroom, they start to realize that they have a deeper connection than either expected. An intriguing start to the novel which culminates in a powerful ending involving an unexpected traitor in Trey’s own pack, and a final battle between wolves. Unfortunately, I will say the middle part of the novel was somewhat disappointing, as the final conflict is barely mentioned at all. Instead, the main focus is Taryn’s integration into Trey’s pack as alpha female. 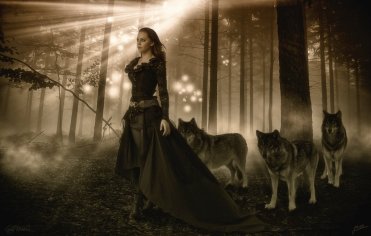 Hands down I must say my favorite feature of this novel was Taryn. Such a refreshing character with enough sass and sarcasm to hold her own in any situation. The sarcasm in particular was something I thoroughly enjoyed, as it was just the perfect amount to provide some comedic relief in stressful situations, yet not too much where you can feel like the character can’t take anything seriously. Sort of reminded me of myself I guess!

I also loved how strong Taryn’s character was. True, she initially relies on Trey to help her out of a bind, but after that she can really stand up for herself. From verbal sparring matches with Trey’s grandma, to refusing to act all jealous and intimidated by one of Trey’s former flings. Taryn doesn’t let the negative opinions surrounding her latency bring her down when trying to prove her worth and status in this new pack. Quite admirable!

Another rather interesting feature of this novel revolved around Taryn and Trey’s sexual relationship. No question, off the charts sexy, with plenty of dirty talk to make even the most seasoned romance novel enthusiast blush. However, I must say at times I thought it was kind of…uncomfortable. Taryn is an alpha female, and Trey is an alpha male, meaning that their inner wolves were constantly battling for dominance in the bedroom. As for who came out on top? Well, it was always Trey.

At one point he tries to explain it away by saying that just because she submits to him it doesn’t mean she has to be submissive. Ok, I kind of get it, but at the same time when their sexual relationship first started there was a lot of Taryn struggling, saying “no” during sex, and fighting against him. Although we are told that technically it’s just her wolf fighting him, it was still kind of disturbing to read at times. I mean, if you were to approach it without the paranormal element involved, you’d be concerned for this woman’s safety. Just goes to show how context can have such an impact on how we view their physical relationship in the beginning!

Series: The Phoenix Pack, book 1. I’ll be continuing with this series.

Should you read it? I feel like this novel could have been condensed a bit more, specifically in the middle when not much was going on, and there was practically no mention of the upcoming battle with Trey’s uncle. Still a unique and exciting paranormal read with a female lead I really enjoyed.

Smut Level: We’ve got enough dirty talk and explicit sexual detail to fill a whole book. Although, I was slightly confused due to the menage warning on Goodreads, and unless I totally dazed out, or had a different version of the novel, there was no menage. Therefore, I guess I was expecting more! Trey is still downright filthy though, especially when Taryn offers herself over to him to do with as he pleases for his birthday. Quite the present!