Welcome back for the second book in the Publicist series! This book was soooo much better than the first one. The Publicist was more of a slow build plot-wise, dealing more with setting the scene and character development, whereas stuff actually happens in this one. Basically the s*#t hits the fan. 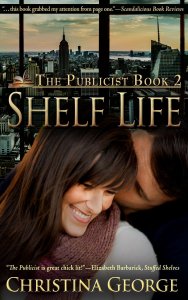 It’s an industry of out-of-control egos, unrealistic expectations, and unfulfilled promises. This is publishing and it’s Kate’s world, but maybe not for long. When one of Kate Mitchell’s star authors is carted away in handcuffs, it’s only the beginning of her troubles. As her world crumbles around her, Kate desperately looks for anyone to hold onto but finds that happy endings are truly works of fiction. With the shelf life of her career and her love affair quickly expiring, Kate sets off on a new adventure. Starting over in California is easy but Kate soon learns that leaving her old life behind isn’t. Nick Lavigne is eager to help her forget but two things still own her heart, the dream of discovering the next great American novel, and MacDermott Ellis. As Kate tries to rebuild her life she finds a surprising gift that reboots her career in a new and unexpected direction. Suddenly her name becomes synonymous with one of the biggest bestsellers publishing has seen in ages and she’s welcomed back with open arms. But at the height of her success the ghosts of her past come back to remind her of the world she’d been trying to forget and the man who never let go of her heart. Behind the book, there’s always more to the story. Welcome to Publishing, the ego has landed.

The reason I enjoyed this book so much more than the first one is because there is infinitely more intrigue going on, specifically related to the authors Kate is forced to deal with as part of her publishing career. In the first book, we were introduced to some wacky characters whose crazy antics were more eye-roll inducing than anything else, but in Shelf Life we observe more of a darker side to the desperation of these authors, some of whom we met in the previous novel, as well as some new ones. One author in particular was already presented to us, but just on a questionable surface level. The mystery of this character is slowly peeled away in this book, and even though you know it is ultimately leading to something awful, you can’t help but continue reading. It’ll leave you on the edge of your seat at times, which was an aspect that never appeared in the first book, thereby making Shelf Life a more dynamic and interesting read. However, it is imperative that you read these books in order, as the actions of this one suspicious author lead to a very dramatic plot twist which has an amazing impact on Kate’s life, both in the publishing world and in her personal life.

And now let’s take a look at Kate’s love life shall we? In my opinion, it’s pretty much headed to hell in a handbasket. Unfortunately, she didn’t follow my advice from the 1st one, which was to choose neither Mac nor Nick. Instead she went with her gut to explore a relationship with the married Mac, and Nick decided to go back to his life in California. If you ask me, he was lucky to get away while he could. However, that doesn’t mean that the story ends there, oh no. After all, Mac is still married, so Kate is constantly struggling with her decision to carry on their affair, while at the same time chastising herself for refusing Nick after he’d been nothing but wonderful to her. Enter major plot twist and Kate’s entire life is thrown upside down. She starts to wonder if maybe Nick is the one for her after all. So basically, just when you thought she had finally made a decision in regards to the love of her life, she changes her mind again. And again! Cheese and crackers, remind me to never go see a movie with this woman. She’d probably take 3 days going back and forth between seeing either Birdman or Boyhood (side note: the Oscars are on February 22nd!).

Unlike the first novel, Nick did have a much larger presence in Shelf Life, which was definitely a welcome change. That being said, he did still seem like something of an afterthought. While it truly does appear Nick is head over heels in love with Kate, I still question why. I felt like we never really got to see that spark between them at the beginning of their relationship, so when he says how she’s the only one for him I just don’t see how he came to that decision. Although the author may have included Nick more in the story line of this book, Kate herself appears to focus much more of her attention on Mac, so once again Nick seems like the designated rebound. Poor guy. Nick, if you ever want to find a woman who’ll treat you right you just look me up sweetie pie 😉

The love triangle happening between Kate, Mac and Nick still has a big presence in this book, although it wasn’t as overwhelming as in book one. Huge plus. And yet, once again, none of them are my favorite character. In the first book, that honor went to Nick’s uncle Allan, and in this one it goes to Kate’s best friend Grace. She has got to be one of the most supportive and loving characters I’ve ever seen. No matter what Kate is going through Grace is always there to give her advice, and when Kate wants to completely go against that advice, Grace doesn’t hold it against her. She convinces Kate that it’s alright to go with your gut, even if your head is telling you to do something different. She really shows what it is to be a true friend, and will always stick with Kate through the toughest of times. Honestly, she’s a stronger person than I am. I like to think of myself as a supportive friend, but I probably would’ve slapped Kate a time or two for her indecision, and for kind of being a bitch towards Nick on more than one occasion.

Overall, book 2 was a definite improvement. We still had the love triangle aspect, but there was also a plot going on, which is pretty important to have in a book. Or so I’m told. I must say though, I am a bit worried for book 3, mainly because everything came together so nicely in this one. I liked the ending. I was happy with it. There really weren’t any loose strings to tie up. But the fact that we still have one more book left in this series makes me think that things are about to go horribly wrong. Please don’t ruin my warm and fuzzy feelings.

Series: The Publicist series, book 2. Be sure to check back next Monday, January 26th for my review of the final installment!

Should you read it: This was a good one. I saw the first book as more of an introduction, but the bulk of the story really takes place in this novel. It’s well written and it holds your interest throughout. What’s not to like? Oh yeah, love triangle.

Smut Level: Overall a fairly clean read, with some “oh my” moments here and there.

Author’s Bio: Christina George has worked in publishing for twenty years (give or take). Here’s what this book isn’t. It’s not a slam against publishing (though it is broken) and it’s not a slam against authors (though some of them are crazy). This book is not autobiographical though many of the stories are true. No you won’t know which ones, cause it’s more fun to guess, right? George continues to work in publicity and helps authors because at the end of the day she does love books, she loves publishing, and she loves authors. She hopes you’ll enjoy this romp through Kate’s world as much as she enjoyed creating it.