Luke is a wild and sexy beast in my opinion. However, he is far from perfect. Not only does he just eat a single Pop-Tart in one sitting, but his favorite flavor is blueberry. What kind of a monster are we dealing with here?! Everyone knows the superior flavor is strawberry!! 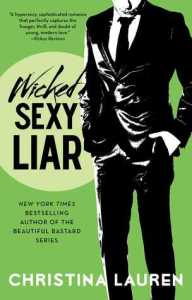 London Hughes is very content to surf daily, tend bar, hang out with her group of friends, and slowly orient herself in the years after college. Everything’s going great and according to the non-plan. But when a wave knocks her for a loop one morning, then Luke Sutter’s flirtatious smile knocks her for another that evening, she veers slightly off course…and into his path. Sure, he’s a total player, but the Why not—it’s only one night is a persistent voice in her ear.

For his part, Luke’s been on hookup autopilot for so long that he rarely ever pauses to consider what he’s doing. But after an amazing time with London, he realizes that he hasn’t been moving on from a devastating heartbreak so much as he’s been drifting to wherever—and whomever—the current takes him. With London he wants more. Every relationship involves two people…plus their pasts. And as much as she enjoys her fling with Luke, when London learns about his past—more specifically, who’s in it—everything becomes the brand of complicated she strives to avoid. It’s up to Luke then to change some things in order to try and ensure he’s not something she’ll outright avoid as well.

In this fourth novel of the Wild Seasons series, we find ourselves veering away from our original three couples who met and hooked up in Vegas, and instead focusing on some friends of theirs. First thought: who the hell are these outsiders?!?! Mkay, so originally I was kind of wary that after the previous 3 novels we’d be introduced to two new characters who were only briefly mentioned beforehand.

Although we still get a glimpse of the fabulous ladies from the first novels, the sexy gents were quite obviously absent from this book. Overall, it was still a fun read, and Luke and London were quite the delight, not to mention sexy as hell! They can get pretty creative with the limited space available on Luke’s couch.

Moving on from the Past

This novel tackles a very interesting topic of trusting someone based on their past indiscretions. When Luke and London first meet, they hook up for a one-night stand; something that is a rather common aspect of Luke’s lifestyle. Hell, he doesn’t even get her name right and calls her Logan instead of London. But then fate keeps bringing them together. Their one night hook-up turns into two, and so on.

All of Luke’s attention is solely focused on London. He feels something for her, he wants to explore it, and possibly even start a serious relationship with her. Since deciding to make a go of things with London he has never given her any reason to doubt or question his intentions. And yet, Luke’s friends, family, and even London herself still see him as a playboy, even though he’s desperately trying to move on from his philandering ways.

How exactly can one move on towards a new future when everyone else continues to view them based on their past? Luke also faces an additional obstacle when it comes to London, as she can’t help but compare him to her ex, who secretly cheated on her for over two years during their seemingly serious relationship. This raises an additional question in how to separate a bad past experience from influencing all of your current choices and decisions? As with any rom-com, a grand gesture is required.

Series: Wild Seasons, book 4. I don’t know if there are any other novels planned after this one, but I personally would love to read a romance featuring the group’s stoner friend, not-Joe, as the male lead. He’s freakin’ hilarious!

Should you read it? Although it was sad to move away from the original three Vegas couples, it was still a fun and sexy read.

Smut Level: These two have some hot and wild sex pretty early on. But it takes a few times before London allows him to get truly intimate with her. Let’s just say it involves his head in her lap.