Erica has gone from hailing cabs and dodging traffic in New York City to dodging fires and poachers in the African safari. Not sure I’d be up to the task honestly! 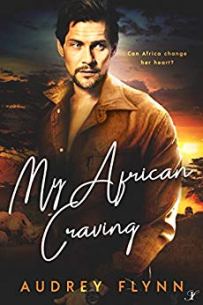 When Erica Knight arrives in Lebombo Game Reserve for her first African safari she has no idea that her life is about to be changed forever. As an executive for a mining company she believes that negotiating the mining rights for the Lebombo Reserve will be a slam-dunk, but she didn’t count on locking horns with the reserve’s enigmatic owner, Jean-Luc de Graaf.

In the heart of a wild African landscape full of beauty and danger, Erica and Jean-Luc both stubborn and passionate find themselves on opposite sides of an escalating conflict. With the Reserve threatened by vicious poachers and runaway fires, they are thrown together unable to contain the scorching attraction between them.

Far away from the rat race of New York Erica feels the stirring of a different drum, ancient and irresistible. But surrendering to the wild would mean she would have to submit to the powerful attraction to Jean-Luc and she isn’t ready to give up control just yet…

Full disclosure here folks. The concept of going on an African safari has never really been very high up on my bucket list. I tried to think of why that is, and honestly it was kind of difficult to pinpoint the exact reason. I love animals, and ever since watching the Lion King as a kid my adoration for lions, giraffes, and most other African safari mammals was cemented. Maybe it’s because deep down I like to think of myself as a city girl through and through, so a real-life safari seems a bit too hot and sweaty for my tastes? However, this short novel does a rather fantastic job of demonstrating the almost transcendental experience an African safari can be for some people. I think the fact that our heroine is also a city girl (and one who loves Cabernet Sauvignon on top of it!) made it easier for me to connect with her appreciation for this beautiful landscape brimming with life. The scenes where we see Erica stare straight into the black depths of these big cats’ eyes provides us with just a small glimpse at how special and ethereal that connection with nature is. Maybe I’ll have to move an African safari just a bit higher up on my bucket list after all 😉

Erica’s purpose in traveling to Africa isn’t solely to go on safari. She’s actually there in an attempt to establish a mining venture in the heart of this magical Game Reserve. This brings her up close and personal with the dedicated owner, Jean-Luc. These two are seemingly enemies on opposite sides of the table. He insists that eco-tourism and maintaining the beauty of this landscape will bring more stability to the region than a big mining company ever could. Not to mention his insistence that preserving the Reserve is crucial to ensuring the safety of the animals. She on the other hand won’t give up on the argument that big business means lots of money and success for the people of the land. There is one crucial feature though which connects these two, even if it seems like it divides them on the surface.

Erica and Jean-Luc are fighters. They fight for what they believe in. They fight to protect those they care about. She grew up in the city, while he grew up in the plains of Africa. She worked two jobs to support her family and herself through college. He came from wealth and a family of privilege. So different on the outside, but they’ve both been taught to take care of themselves. Jean-Luc’s father was supportive, yet always taught him to work hard, and that in the bush you have to take care of yourself. You won’t always have someone to come to your rescue. As for Erica, her father abandoned her mother, sister and herself when she was young. While she didn’t have the constant support of a father-figure, his departure was perhaps the greatest life lesson she’d ever received. She learned to take care of her family through her own hard work and dedication. She couldn’t wait around hoping he’d come back. This inner determination makes it hard for either Erica or Jean-Luc to back down on what they’re fighting for, but they both recognize and appreciate that fight in the other.

This novel certainly packs a punch in just 138 short pages. We have the arguments over the mining establishment, the constant threat of poachers to the tranquility of the Reserve, not to mention an approaching bush fire that might just destroy the entire region. And in the midst of it all there’s a budding romance between these supposed enemies. There’s a lot going on, but each subplot really does play an important role to the overall story. The drama involving the mines establishes the initial animosity and distrust between our two lead characters, but the hazards of hunters and flames demonstrate a crucial softer-side to both Erica and Jean-Luc.

Ironically enough, the most exciting moments for me were not the ones involving a dramatic retreat from a bush fire, or a showdown with poachers. No, instead it was the few scenes where we find Erica and Jean-Luc finding a moment of peace and alone time together. It’s almost like the whole world stands still, and they’re able to connect in their own solitary bubble, even if they both know that they only have limited moments together before that tranquility is interrupted. Whether it be a quiet picnic next to a secluded lake, or a passionate embrace in the shower, Erica and Jean-Luc can find a few precious moments where they don’t just put their differences aside, but their differences practically disappear completely. Hands down, my favorite scenes of the book.

Series: Stand-alone. I’d really love to see a continuation where different characters might find their own serenity and romance in the midst of the Lebombo Reserve.

Final Impression: There’s definitely a lot going on in this short novel, and while you can’t really remove any subplot without the overall story feeling slightly broken, I do think adding just a few more chapters could have provided us with more depth to these side dramas. I did sort of guess one part of the big final reveal in regards to the poachers, but honestly I was expecting more sabotage than what we got. Ultimately I’m happy my inkling was incorrect as it would have been pretty heartbreaking, but the actual climax was still slightly predictable. I did enjoy seeing Erica and Jean-Luc find their few moments of tenderness and solitude in the midst of all the difficulties they’re dealing with in life. They’ve both put up walls in an attempt to protect themselves from the hurt of Erica’s eventual return to the US, but as they get through these dangers together their walls start to fall down, and in the end they’re left with each other.

Smut Level: These two slowly explore each other in a shower. But not just any shower. An outdoor shower!!! Definitely upping the details of this sexcapade locale.